What professional indoor gardeners are saying about Agriair® purifiers: 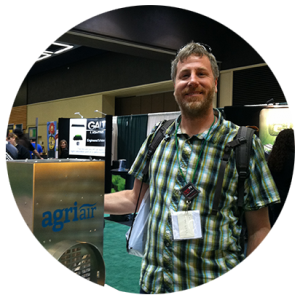 “We installed an Agriair® 1000 PG air purifier into a 225 square foot, 10,000 watt sealed room just over 5 months ago. Our initial purpose for this trial was to determine whether or not a room saturated with Hydro-Peroxides would have any mitigating effect on Cannabis terpenoid production.

Through a third party laboratory we had plant material analyzed for terpene content. Two samples were submitted. The first sample came from the most recent harvest before the Agriair® was employed. The second sample submitted represented product from the first harvest after the Agriair® had run 24/7 for nine weeks in the flower chamber. The results from Sunrise Analytical confirmed that there was zero terpene loss in the second submission.

We were also impressed with the Agriair’s® ability to mitigate odors inside and around the exterior of the grow space. As an added bonus: we experienced zero mold build up in our air handler!

In this new era of exponentially expanding plant pathogens effecting medical and recreational cannabis, the Agriair® peroxide generators are the answer to insuring that the airborne environment is as sterile as possible.”

“We believe that the Agriair® 1000 unit has played numerous beneficial roles in our production facility, and has become an important component of our product quality assurance and environmental risk management procedures. As indoor growers, we are overcautious about maintaining a beneficial environment for both our plants and our employees, mitigating microbial growth in all stages of cultivation, and ensuring general sterility to the highest degree possible. Constantly cleaning hard to access areas such as ceilings and HVAC ducting is an added bonus. The people at Agriair® were helpful in evaluating the right unit for us, and continue to be responsive and helpful nearly a year after purchase.“

“Agriair® was pointed out to me by a good friend and respected individual in the hydroponics industry. After many long conversations about success they had been seeing on indoor cultivation I decided to try the technology outside in my greenhouse in the middle of the winter. Successful, to say the least, I strongly believe that filtering and scrubbing the greenhouse while sealed for 12 hours of the day was a huge part of my success.

We still do preventative maintenance and treatments, as the saying goes, an ounce of prevention is a pound of cured however these units and technology is a game changer. Thank you for helping my business produce the highest grade, clean and safe medicine!!”

“We have been roving the unit throughout the facility in particular bloom rooms with varieties that show signs, or have a history of fungal issues. Each CHE (Contained Horticultural Environment) is just less than 7000 cubic feet. We find that after 24 hours the area has a deionized odor. It definitely knocks out the odor in blooming CHE’s that would usually be very pungent when we open the door. We have noticed decreased signs of fungal issues in areas treated with the unit.

We are just finishing the harvest in Bloom 4, Crop 28, with an Agriair® 1000 unit in use for the duration of the flowering phase.

We have had no fungal issues during flower in this room and I will have finished product QA results in 2-3 weeks once the product is dried, cured, batched and QA results received. As noted before, B4, since Agriair® install has maintained that sterile clean smell for the duration of use different than other flowering rooms that reek of the dank smell of cannabis.

After completing an indoor air quality consult on 6/10/2015 with mold air sampling in and around the facility to determine a baseline spore count and assessment of general indoor air quality. Total spores/m3 in B4 were 67 compared to the ambient within the facility; 200, and outside; 960.”

“Scientific compliance is something that’s new to our industry. We purchased our unit to combat microbes, specifically bile tolerant gram negative bacteria. Our entire experience was awesome. April was extremely knowledgeable and insightful; she worked with us to prepare a unit that we were able to pick up in person. Awesome!“